SLAMABAD: Normalcy returned to the twin-cities as Pakistan Tehreek-e-Insaf cancelled its warm-up rally on Saturday to avoid arrest of its workers.

In Islamabad, the rally was planned to take place from Bhara Kahu to Sector-I8. However, it was cancelled in view of avoiding arrests of party members. The PTI cheif has directed his workers to show their presence at Nov 2 sit-in

Speaking to Geo News, PTI chief said that he would wait for the Islamabad High Court’s decision. 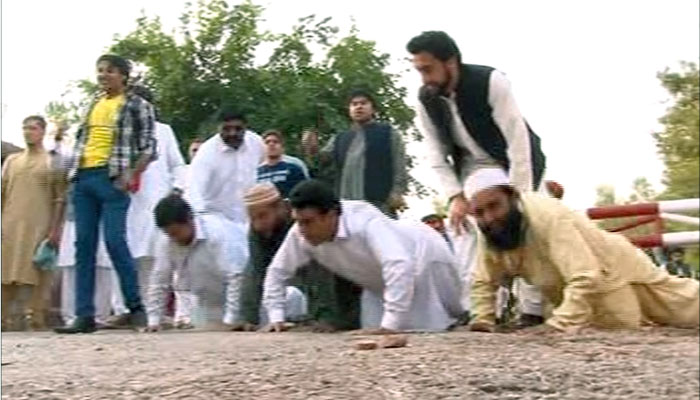 PTI workers spent the night out in the cold in Bani Gala. In the morning they did warm-up exercise and began the search for breakfast.

They went ahead and asked their chairman for warm water and shampoo.

They will be served breakfast at Bani Gala.

Earlier during the day, PTI workers clashed with police at Pakistan Chowk in Bani Gala —the residence of Imran Khan in Islamabad— as they gathered there time and again, and pelted stones at police. The law enforcers fired tear-gas shells to disperse the PTI workers, forcing them to take refuge in narrow alleys in the vicinity.

Police also baton-charged the protesters and apprehended a number of them. Officials said the arrested masses were PTI workers, who had arrived in Bani Gala from Khyber Pakhtunkhwa.

Speaking to journalists’ outside his Bani Gala residence, Imran Khan vowed that his party’s planned Islamabad sit-in could not be stopped.

In response to a question on if he would be going to Rawalpindi, Khan replied that his party’s target was November 2. “Wait for November 2; even 50,000 policemen will not be able to stop the tsunami.”

Khan who was confined to his Bani Gala residence throughout the day on Friday asked what law had he broken to almost be placed under house arrest.

Khan said the government was not following court orders. “I ask from the government of Nawaz Sharif that is this democracy or a monarchy. When there was an Islamabad High Court order to not block areas, why was the entire Bani Gala closed. Why was I almost placed under house arrest.”

“I ask the judiciary why was I stopped from going to Sheikh Rasheed’s rally in Rawalpindi.”

‘Time to rid country of corruption’

Speaking to media, PTI spokesman Naeemul Haq termed today as the ‘darkest day’ in political history of the country and said that a time had come to rid Pakistan of corruption.

“Even I was stopped from entering Imran Khan’s house,” he said, alleging police of ‘torturing and illegally’ arresting PTI workers.

Reacting to musician Salman Ahmed’s arrest, the PTI spokesman reminded that Ahmed was an ambassador of the United Nation’s for its anti-polio campaign.

Haq contended that the protest in Rawalpindi was in accordance with the Constitution of Pakistan and the government itself violated the Islamabad High Court’s orders barring illegal arrest of workers.