A loud explosion also occurred in the vicinity that echoed to far-flung areas, our correspondent said, resulting in panic for a brief period. Sources said the attackers also lobbed three crackers which resulted in a fire breaking out inside the centre.

Heavy contingents of police and Frontier Corps reached the spot and surrounded the vicinity. Pakistan Army, FC troops, as well as police commandos cleared the hostels after four hours of operation. Recruits of the college have returned to their barracks.

Talking to media personnel, Balochistan Home Minister Sarfraz Bugti said that three militants had targeted the guard of the hostel before entering the premises.

“The militants targeted the sentry stationed at the watch tower. He fought bravely against the militants but embraced martyrdom,” he said.

At the time of the attack, an estimated 700 cadets were present inside the Police Training Centre, Bugti said, adding that two suicide bombers blew themselves up inside the training centre. One of the terrorists who was also wearing a suicide jacket was killed before he could detonate himself. “Due to timely action any major loss was thwarted and 250 cadets were rescued,” he said.

IG FC Major General Sher Afghan informed the press that the attackers acted on directions from Afghanistan and the initial investigation suggests that the terrorists were affiliated with Lashkar-e- Jhangvi Al Almi.

According to a recruit who witnessed the entire situation, the militants had barged into the training centre around 11:30 PM and opened indiscriminate fire. “Then, they entered into the barracks,” he said. The militants’ faces were covered. 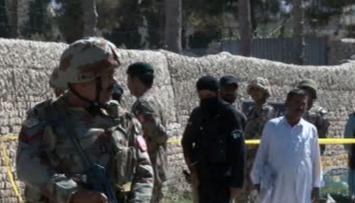 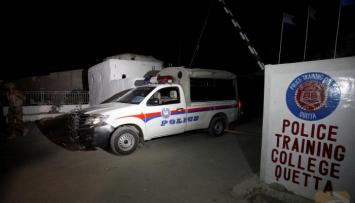 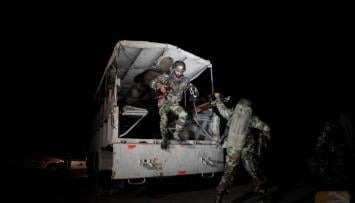 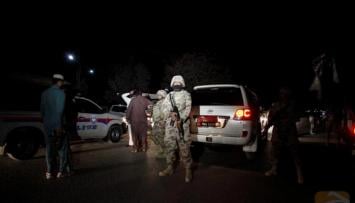 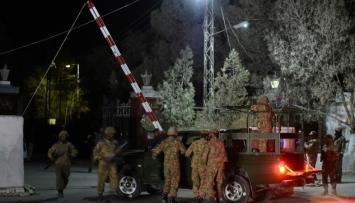 Inter-Services Public Relations (ISPR) had initially said that five to six terrorists had stormed the police training centre. However, later Home Minister Balochistan revealed that three terrorists had carried out the attack.

Those injured in the attack were shifted to Civil Hospital Quetta and CMH, hospital sources said. They included recruits, who attempted to flee the centre as terrorists waged the attack. Meanwhile, emergency has been imposed in the hospitals across the provincial capital.

Bodies of the martyred have been shifted to Police Line for funeral prayers.

According to Chief Minister Balochistan Sanaullah Zehri, there were prior intelligence reports of an attack and security had been on high alert. Due to high security across the provincial capital, these terrorists had opted for the police college in a suburban area, he added.

Praising the security forces he said that the Pakistan Army and police showed worked together smoothly. “Security agencies fought valiantly. Those martyred in the attack are our heroes.”

“Will get to the bottom of this,” he added.

Prime Minister Nawaz Sharif has postponed all official duties and will visit Quetta shortly. He is expected to chair a special meeting to review the law and order situation of the city.

According to a press statement, PM Nawaz expressed concerns over the attack and directed the federal and provincial security agencies to bring the perpetrators to task.

People are sick and tired of collecting bodies of loved ones: Ch Nisar

“It is a sad moment for me and the entire Pakistan,” he said, speaking to journalists on Tuesday.

He said that justice had just become a mere slogan for Pakistan adding that people were sick and tired of picking up bodies of their loved ones.

He added that the overall security situation of the country had improved and terrorism-related incidents had decreased but a single incident like the one in Quetta wiped off the months of hard work security agencies had put in to maintain peace.